1. Introduce yourself, tell me what you do in Architects and how long has the band been together?

Sam: My name is Samuel Carter and I sing for Architects, the band was formed in 2004 and I joined in last 06 early 07, when there old vocalist decided to leave the band .

2. Where’s the band from and what’s the music scene like there, any bands you’d recommend?

Sam: We live in Brighton, England and its amazing the scene isn’t as buzzing as it once was but there’s always shows on busy night life and something to do there’s still a few good bands from Brighton e.g. The Ghost of a Thousand, Brides, The Mire, Dead Swans.

3. Is there any story or concept behind the title “Hollow Crown”?

Sam: The concept behind Hollow Crown, was that we were all getting fed up with certain people/bands getting everything so easily – not really working for it, walking around with these false crowns! While we were and still are working as hard a possible and felt like we were getting nowhere, and the title got people to stand up and realize who we were and what we wanted to achieve! People to see a hard working real down to earth band!

4. With so many hardcore bands out there, what do you think makes Architects stand out from the crowd?

5. What can briefly be said about your latest music video for “Follow The Water”?

Sam: Follow the water video was really fun! We decided to rent this venue that we used to play a bunch put on a show after and kids just went off! I mean they went instantly off such a fun day we had a really great time!

6. You’re currently touring around the U.K. as apart of the NEVER SAY DIE 2009 Tour, how is that run treating everybody.

Sam: Were actually in Canada right now, we start the UK next week we’re really excited to get back to the UK/Europe its gona be a lot of fun!

7. Do you consider Architects to be a Christian band? Do you feel affiliated in any way to this term?

Sam: Were not a Christian band! None of us are Christians so I’d hope nobody would affiliate us with that.

8. What can one expect from a live Architects show?

Sam: A lot of energy and fun! We always put on the best show we can! No matter how many people or how long we’ve been on tour.

9. Will the Architects be playing in the U.S. anytime soon.

Sam: We just got off a 6 week tour with etid/bmth but hopefully well be back soon, we had a lot of fun this time round so were pumped to get back.

10. What would you like a listener to remember the mot after hearing “hollow crown” all the way through for the first time?

Sam: I would like the listener to go back to the start and listen to the record again and again until they knew all the words and came to one of our shows.

11. Have any plans for the remainder of this year, and what should we expect from you come next year?

Sam: After the Never Say Die Tour we are going to take a bit of time off to write our new record, and just generally be at home and take some time to relax. But don’t you worry well be back in the New Year!

12. Any final words of wisdom?

Sam: Thank you for checking us out! Spread the word and tell all of your friends! 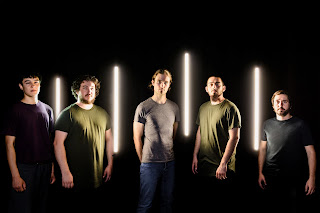 CKRAFT Discusses the Elementals of Their Music!