Story Of The Year Interview 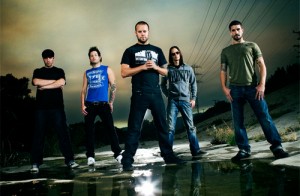 Natalie Perez of Natalie’s World conducted an interview with the guys of Story Of The Year! You can also check out the video portion HERE.

1. You’ve guys been around for 14 yrs anything planned for the 15 yr mark come 2010?
Dan: Most definitely we have a new record coming out.

2. Will we be seeing you on Jimmy Kimmel Live anytime soon?

Dan: Hopefully have to have them ask us we did that back in the day, played Jimmy Kimmel, Carson Daily, etc.

3. I first got into you guys in 2004, when you were a part of the Nintendo Fusion Tour and was an extra in your music video for “Anthem Of Our Dying Day,” looking back on when you first entered the music scene up to this point, how does that make you feel?

Ryan: It’s hard to keep up with all the latest trends.

4. What I’ve noticed about Story of the Year is that you play a handful of shows, in your hometown and then you come out to California, why the on/off routine?

Dan: Why not? We’re always around when we’re at home and whenever California wants us we come out and play.

5. When will we be seeing the new album?

6. In my opinion after getting into you guys in 04, I had also gotten into this other rock act known as Three Days Grace, would you consider going on tour with them, I think that’d make a great line-up.

Dan: I think the producer that did our last albums worked with them on their first one.

Phillip: But I don’t know if our fans would get along with their fans.

Dan: We’ll just see what can possibly be set up.

7. Out of all the music videos and albums to date, which is your absolute favorite and why?

Dan: Probably Until The Day I Die and our new album.

Josh: Sidewalks *Laughs* and of course our new album.

Phillip: Take Me Back, and the new album.

Adam: The Antidote and the new album that’s not out yet.

Ryan: Take Me Back, and the new album.

8. You guys did a cover of Metallia’s “Enter Sandman” would you ever consider recording it, and what other cover tunes would you want to include?

Adam: I want too!

Dan: Its one of those songs that sounds good the way it is, because when we play it live it’s our own style so to go and record it it’s just not going to sound as good. We might record it on another live album probably that’d be cool.

Dan: Go out on tour in November/December with The Devil Wears Prada, and then basically tour all of next year when and after the new album comes out.

Dan: Go pick up the new album when it comes out.

Josh: yeah definitely go get it once it’s been dropped.

Adam: Go get the new album when it comes out.

Ryan: Pick it up!

Phillip: Look for the new album come the New Year!