Natalie Perez of Natalie’s World conducted an interview with Trivium! You can also check out the video portion HERE.

1. Introduce yourself and what you do in Trivium?
Cory: Names Cory I play guitar and back-up vocals.

2. How is the current tour going, getting along with everybody?
Cory: Its great today the two tours joined together. Other than that we’ve just been headlining. We have toured with Chimaira before one of the other bands we don’t know quite well is Whitechapel. Shaun of Dirge Within we’ve known him for years even before Dirge Within even began. Plus we’re good friends with the guys of Cannibal Corpse as well so it’s been a lot of fun.

3. Who do you think you’ve spent the most time with on this tour?
Cory: Have to be the guys of Dirge Within. We get along with those guys great. We hang out with them a lot showing them a good time. Every couple of days we have one of them come ride with us on our bus let them sleep instead of being cramped up in the van. Those guys are really cool and fun to hang out with.

4. How did this combination of Trivium and Hatebreed come to be, was it on purpose?
Cory: Our tour and Hatebreed’s tour we’re both booked playing Los Angeles so the promoter thought it’d be better to just fuse them together. By the looks of it it’s a petty solid crowd. Only downside is having the bands play so early and people can’t make it out to the show because of work or other issues but other than that, we can’t really complain.

6. Out of all the music videos and albums to date, which is your favorite and why?
Cory: Favorite video would be “Throws of Proditiction”, we watched some of our older videos and it was embarrassing. The last video for “The Crusade”, we met up with this guy Ram who’s done every video with us since then. He truly delivers when it comes to the videos and we’ve happy with them he really represents the band well. As for albums I think the ones that stand out the most would have to be “Ascendy” and “Shogun”.

7. If you had to run into yourself 10 years ago and tell yourself what you’re in store for what would you say?
Cory: 10 years ago I’d still be in high school so I’d probably say “Get ready for some fun”.

8. Anything else you’d like to add?
Cory: If you haven’t heard of us already go check us out on MySpace and see what you like and take it from there. 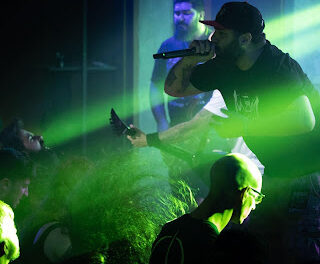 Unmuted Talked of Recent Tracks Out and About, Show and Touring Plans Too!

Anagnorisis’ Zak, Zachary, and Sam says their an Act Unlike Any Other!