George Zimmerman: As If There Was Any Serious Doubt To His Guilt There Isn’t Now

Mr. Zimmerman’s a name that will live in infamy throughout history since his fatally shooting 17 year old Trayvon Martin on an ill-fated night in Florida 2012. Where the latter was mistaken for a burglar post a rash of robberies in the neighborhood, followed, confronted; the altercation that persisted one where Zimmerman pulled a gun shooting Martin to death, maintaining all along he feared for his life, a line he would stick to through police interview after police interview, trial, subsequent press interviews post court proceedings. What happened next was a very public police investigation hounded by accusations of bias in the aftermath of our growing awakening to police brutality gone viral, citizen brutality against teens, minorities and especially blacks easily mirroring what we were discovering about authority meant to, whose motto is, protect and serve. Followed by a trial of seemingly bumbling prosecution witnesses including Rachel Jeantel whose combination of Ebonics and teen vernacular became a public indictment surpassing the prosecution’s case to the school system who allowed this inarticulate person high school admittance at all to the village, community who raised her purposed goal toward such ‘obvious ignorance’ embodying every stereotype about her culture and race, topping it off with comments about her weight and her ‘dressed down’ appearance while in a court of law, not the least influenced by the fact media cameras were allowed in giving people a feel they were watching Law and Order not reality, where ordinary people don’t look like movie starts, the lines aren’t scripted and everyone isn’t dressed to the 9’s by someone in wardrobe. An ‘absurd’ parading of skittles and iced tea as court’s evidence marked with exhibit letters beforehand juxtaposed against the large cement block brought in meant to represent the curb Zimmerman’s head was allegedly repeatedly bashed into; which one made the more powerful visual. When at issue wasn’t whether young Trayvon was a thug, carrying a weapon, drug addict if not drug dealer, rather whether or not he instigated the physical fight everyone admits he got into with Zimmerman; at least that’s what skeptics will tell you to this day. Culminating in an absolute acquittal for the crime of second degree murder and all lesser charges relating to the death of Trayvon Martin on a criminal, federal level sparking equal parts outrage and a feeling justice was served. Outrage because a young man is dead, not from gang banging, possession of a weapon, a history of trouble at school, brushes with the law, committing a crime that very night, but for being let out after dark at 17, for buying skittles and iced tea from a convenience store and walking home to his father’s house, hoodie up due to the rain, hoodies synonymous with people up to no good, being new to the neighborhood, possibly lost and frightened by the creepy person following him in his car, then on foot. Justice served in the minds of others because George Zimmerman clearly showed evidence of being in a physical fight, citizens who believe it was him and not Martin on 9-1-1 tape screaming for help, identifying with sentiments expressed through people like juror B-37 fueled by the narrative of the young black thug, news stories of young black men and boys doing anything from punching teachers to robbing stores. They could understand community active, member of the neighborhood watch, placed several calls to police in an effort to try and clean up his neighborhood, Zimmerman’s fear for his life, but not Trayvon’s faced with a strange man following him in the dark. And while the Marin family and Martin’s mother have gone on to speak out about what she believes is a miscarriage of justice regarding her son, form a foundation in his name, lend help to subsequent movements like Black Lives Matter, continually reaching out to mothers like herself grappling with the death of a son via hair trigger police or skittish citizenry, supposedly upstanding member of the community, totally relatable George Zimmerman couldn’t stay out of the headlines or out of trouble if his life depended on it. Name splashed across the television news, magazines, newspapers, viral on the internet again for a confederate flag he painted hung in a ‘no Muslims’ gun shop, his arrest for aggravated assault, suspected domestic violence against both his wife and his girlfriend, pulled over in Texas for speeding, let off with a warning; making news because the same officers, department who took a selfie with him pulled over Kametra Barbour in her red car housing 4 children when they were looking for a tan car with 4 teen to adult males and a gun, subjecting her to a felony traffic stop that left both her and her kids traumatized by low level PTSD.  Then there’s the evolving story that cropped up about 2 weeks ago as George Zimmerman put up for auction the gun he shot Trayvon Martin with, recently returned to him by police; one gun seller almost immediately taking it down, another auction site inundated with prank bids ranging in the millions, latest announcement—auction, on the one site willing to host it, is closed, bids in the double digit thousands. Reigniting old debates about race, individual rights and gun ownership in America; assuredly opening old wounds for Martin’s family as Zimmerman treats the death of their son via the gun he used, as a celebrity piece, as a means to an end to make money he admittedly says he will spend fighting the group Black Lives Matter and its supporters, in his mind, including democratic presidential candidate Hillary Clinton. Actions generating comments like Larry Whitmore’s spot on scathing assessment encapsulating it all: “who woke up this rotting piece of human excrement?” 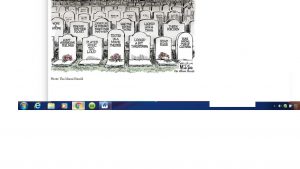 America becoming a Third World Country: And we’re doing it to ourselves

Artists Have Day Jobs Because No One Values Art, Artists Or Artisans Anymore