Next Door To Heaven Talks of New EP and Being Noticed! 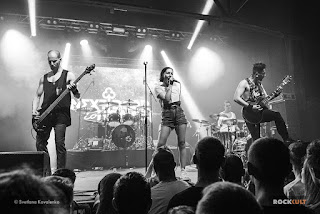 Formed in 2014, NEXT DOOR TO HEAVEN has been around for sometime now, releasing two albums and single’s as well. An all new EP is out real soon, with the band themselves not going away anytime soon but wanting to remain in the spotlight seeing where it will take them next. The band talks of these matters and more.

Our band was formed in 2014 by Daria Mazunova and Gene Mazunov in St Petersburg, Russia.

2. What’s the origin of the band’s name?

3. Where is the band based out of and what is your music scene like there? Are there any local bands you could recommend?

Like anywhere else in the world in general but I guess a little more chauvinistic, unfortunately. Hope it will change once. I’d recommend you to listen to Slaughter to Prevail. It’s a great band.

4. How would you describe your style?

Progressive, sometimes alternative metalcore. We love being more melodic. We’re an exceptional band because we’re not trying to be anyone else. Our motto is “do what you want to and stay yourself”.

5. What have you released so far and what can someone expect from your works?

6. Do you have any new music in the works?

We’re up to release our EP “Inside” on March,25th. Pre-sale starts on Itunes on March,18. One of the tracks is a collab with Lord Nelson (ex-Stuck Mojo) so you’ll also hear some rap there.

7. How about playing shows and touring, have anything planned out?

Most musicians feel the same for a year already. Everyone’s waiting for the world to recover and right after borders reopen again and life gets back to normal we’ll start touring again.

8. What plans do you have for the future as a band?

We’re quite ambitious actually and will fight for our place in the sun. You will surely hear more about us soon. We’ll continue to make good music of course.

Here you can find all the links https://band.link/d3JyP

10. What is it you’d like a listener to remember the most when hearing your music for the first time?

It’s not easy listening music. You have to dive into this atmosphere then you will be able to feel a special mood. Also tracks on one album/EP can be very different. Choose the ones that satisfy your musical preferences.