Alternative power sources are being looked at now more than ever to provide a resolve to the impending climate change crisis. By virtue of our current political system, it has naturally followed that the economic considerations of transnational corporations, coupled with indignant governments that have submitted to their will, have been assigned the task of overcoming the almost certain catastrophe we’re slipping further and further in to. So what are their plans? And whose interests are their ideas for our future serving? 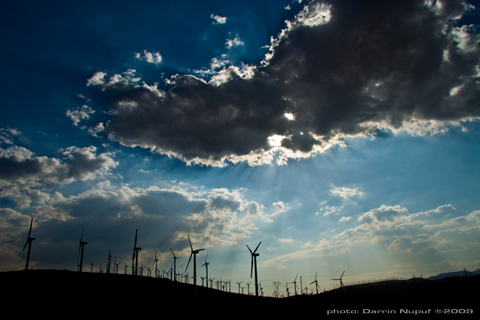 Mammoth research and development has gone toward the search for alternative energy sources, and there is no shortage of options to be taken. In the realm of energy generation there exists ‘renewable’ (carbon neutral), and ‘low carbon emission’ sources. Renewable sources have no negative effect on the environment, are generally easily implemented, cost less, and are more efficient – geothermal power, hydroelectricity, wind power, solar power, wave power and tidal power, to name a few. Low emission sources have less of a negative impact than fossil fuels do, which is positive, but are we seeking better alternatives than the current system, or the best possible alternative? A few examples are nuclear power, biomass energy, compressed natural gas, oil shale power, and the list goes on. Low emission sources have been pursued almost exclusively, to the burden of posterity, and the benefit of big business.

Of all of these sources, nuclear power has certainly received the most attention. It is a source of power generation that is irrevocably well on its way to becoming our next primary power source. As of 30 March 2012, 31 countries had 436 operative nuclear reactors (excluding those used for military purposes) and 63 new plants are currently under construction in 15 countries.1 This, even after at least 20 nuclear calamities of recent history including that of Middletown, Pennsylvania in 1985, the 1986 Chernobyl catastrophe in the Ukraine, the Oak Harbour disaster of 2002 in Ohio, and more recently, the Japanese Fukushima Dai-ichi Power Plant meltdown of 11 March 20112 that lead to inconceivable widespread devastation, and rendered otherwise useful land as toxic.

Despite the over investment in nuclear power, and that 14% of the world’s power use in 2009 was from nuclear energy,*3 the industry is still plagued with problems. It is commonplace that reactors go over budget by billions, and decommissioning plants has proven so difficult and expensive that modern power stations are kept operating beyond their useful. Worse yet, a viable solution for unthinkably dangerous radioactive waste has yet to be found. *4

To use the words of Noam Chomsky
“There are two major threats of the lives and death of the humankind … One is environmental catastrophe, the other is the threat of nuclear power.”
The reality is that the benefits of nuclear power as per the public domain are distorted and misguided. The real cost of nuclear electricity is indeed more than that of wind, bio-waste, solar, or geothermal electricity generation in more ways than one.5 But still, nuclear power has been among the most heavily invested industries in the world for the past half century, with over USD $300 billion in direct and indirect subsidies granted by the USA alone as compared with little over USD $6 billion for both wind and solar energy combined. *6

The world has recently been beset by natural disasters that have been directly attributed to climate change and have strongly emphasized the need for fast decisive action to go toward reversing the damage caused by our addiction to fossil fuels. If it was announced tomorrow that Congress was going to commission the construction of a new power plant, it would be at least 15 years before it could ever deliver electricity, as compared with wind turbines that could be delivering power within a year and increased operational efficiencies that could be going toward the efforts tomorrow. *7 As such, the environment cannot afford to wait decades for a response, decisive action need be taken now.

Another element behind the facade of nuclear energy that is surprisingly not common knowledge is that nuclear power is not carbon free by any measure. Dr. Ian Lowe, President of the Australian Conservation Foundation, conducted research in to this area and found that in the short term (which is 20 – 25 years), the situation will be made worse by the energy needed to mine and process uranium ores, enrich the fuel, transport it, construct the nuclear power stations and store the waste.*8 Although a nuclear energy program will release less green house emissions than fossil fuels it is by no means carbon-neutral and does not compete against renewable energies to this end.
Further, the high grade uranium ores that nuclear power is dependent upon are limited. Estimates put the remaining mines of the element at adequate to supply current demand for 40 – 50 years without any expansion to the current use. There is no foreseeable shortage of lower grade ores, however, these require substantial (carbon emitting) energy using resources for extraction and processing, contrary to the cause that nuclear power is apparently advocating.

Perhaps the most inescapable factor to be considered is the danger that the existence of nuclear power presents to humanity at large. The recent meltdown of the Fukushima Dai-ichi power plant reinforces this notion absolutely. Here, despite the various ‘phases’ of safety precautions for situations like the earthquake that it was faced with on 11 March 2011, the reactor still went in to meltdown and had consequences further far reaching than you may think.

Those in the surrounding areas of Fukushima were obviously affected, but it is less stated that the effects of the melt down were as far spread as 150 miles away and beyond, according to an estimate by British scientist Christopher Busby among others.*9 As such, this ignited fears in other parts of the world where pro nuclear governments are undergoing construction of reactors on the edge of borders with other countries. One such concerned party is Lithuania. The Russia government has financed and commenced preliminary construction of two nuclear reactors in Belarus, a mere 40km from bordering Lithuania.*10 If a Fukushima-like melt down is to occur, there is no doubt that Lithuania will be negatively affected, and to a severe extent.

But surely the authorities ought to have known of the risks associated with a nuclear power plant in Japan, such a natural disaster stricken area of the globe? This is a claim that Tokyo Electric Power Company (TEPCO) staunchly defended. However evidence has recently come to light that energy companies have been warned about the risk of reactors in Japan owing to the country’s long record of natural disasters, through a leaked document on Wikileaks, a controversial Internet platform for whistle blowers.

It was leaked that on March 24, the Kanazawa District Court ordered the Hokuriku Electric Power Company (Rikuden) to shut down operations at Unit Two of its Shika Nuclear Power Plants. The recommendation came due to safety concerns over its ability to withstand powerful earthquakes. The court came to the inescapable conclusion (in documents that are not in the public domain, nor were ever going to be released) that the plaintiffs had exposed themselves to a real risk of radiation exposure if there was an earthquake of a large magnitude in the area.*11 Naturally, the operator did not accept this advice, but nor was it obliged to as this was a civil dispute. It has long been established that ‘big business’ will not conduct independent research in to the negative effects of their activities (or otherwise not release the information if it is available), but this situation is testament to the fact that despite warning, ‘big business’ will thoroughly defend their never-ending pursuit of profit.

Further to the dangers of operating a nuclear power plant, the systems currently in place for waste storage do not address the problem of a sustainable method. With more waste accumulating the problem persists, and is getting bigger. The best solution has been offered in Sweden, although estimates as to the initial cost of the underground facility has been at USD$12 billion and still, it does not suffice as a sustainable solution – it will take over 100,000 years until the spent fuel is no longer a threat.*12

The economic cost of waste disposal is substantial, and nuclear power companies have resorted to grossly inhumane methods, including the recent toxic dumping of radioactive waste on the Coite D’Ivoire (The Ivory Coast) in 2006. The incident left thousands dead, hundreds of thousands displaced and over 100,000 hospitalized.*13 Further to this, the intentionally conducted disaster was subject to litigation initiated by Trafigura, an oil-trading giant, for a ‘gag order’ in the UK, which disallowed any press coverage on the incident.*14 It seems therefore irresistible to think that the extraordinary lengths that have been resorted to are evidence of a fabrication of the implications of nuclear energy by the parties with a vested interest in the industry.

However, among all the stated drawbacks, there have emerged examples that conjure optimism. The Fukushima Dai-ichi nuclear power plant meltdown caused a stir in international politics, where maximum impact was had in Germany. German Chancellor Angela Merkel had, prior to the incident, insisted on a policy entrenched with a nuclear solution to climate change. After the meltdown, and when its impacts became apparent, she changed her policy to one mainly concerned with renewable sources. As such, climate change is instead being dealt with by new projects proposed such as a 20km wind farm off the coast of Rugen, as well as several proposals under way for solar energy projects and further investment in the solar thermal industry. *15

Nuclear power will not go toward substantially reducing electricity generation’s impact on the environment. It is certainly not far fetched to then think that the emphasis on this argument has been fabricated to detract from the dangers that it holds for humanity. There is no shortage of powerful stakeholders with a vested interest in widespread nuclear electricity generation, and the age-old economic motive lies behind its implementation. The very suggestion of nuclear energy ought to have been dismissed from the very beginning, to borrow the words of Dr Ian Lowe
If nuclear is the answer, it must have been a pretty silly question!*16

Pr-Gateway, Germany leads the way in Sustainability and Green Meetings (2011) Your Storyat 30 April 2011.

Anthony joins the IMN team from Sydney, Australia. Living in the metropolitan region of this cosmopolitan hub of arts, science, research and politics, he has familiarized himself with current issues on both a regional and international scale, and has taken a keen interest in philosophy and politics.

When Video is not enough: What Does It Take to Indict a Potentially Crooked Cop?

The Problem With “Female Bodies and Alcohol”: Stop Framing Campus Sexual Assault As A Drinking Issue—Agree To Disagree A Critique